It was almost two years ago when I created a custom “Do Not Disturb” button for my home office that allowed me to tell my family that I’m in a meeting and please don’t casually pop in. I wrote a post about it, but the up shot is that I cobbled together some parts I had around, 3D printed a case, and wrote some code that so that the button, connected via USB to my computer, would act as a keyboard and fire a keyboard shortcut. That keyboard shortcut would then trigger a bash script that turned on a red light outside my door.

Well…all of that is fully automated now. There is no button. The button is in all of us. We are all the button.

Let’s talk about this new automated system I made this weekend. 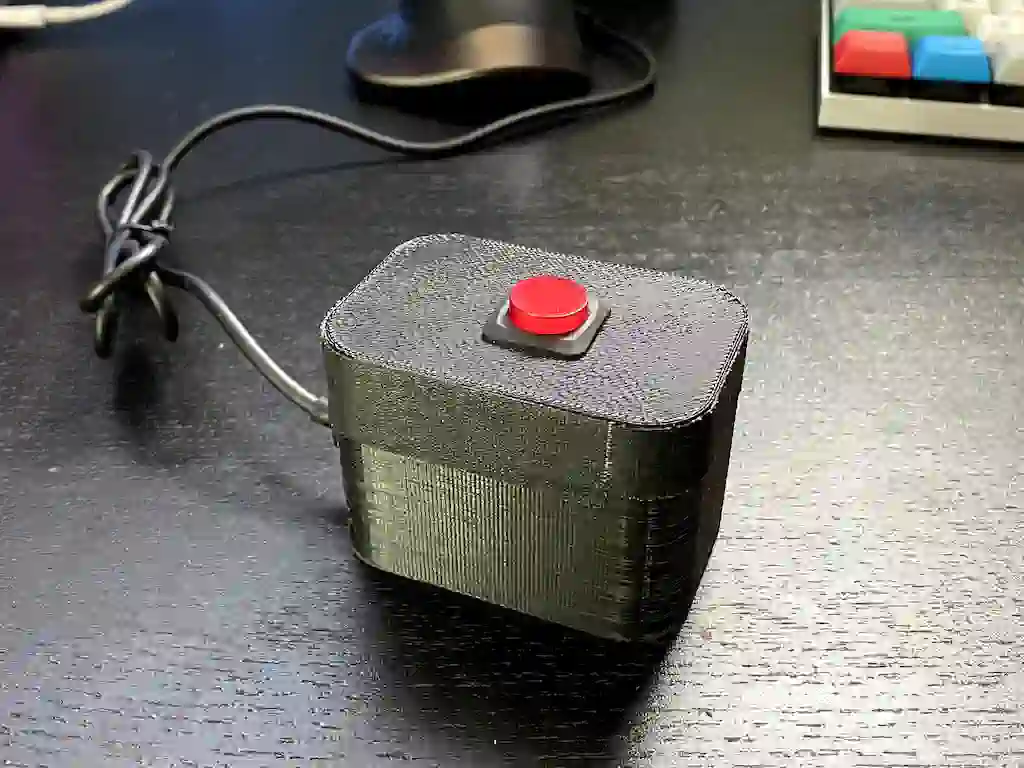 Anyone who’s been reading my recent posts won’t be surprised with the foundational pieces of the new automated solution: Keyboard Maestro and my Stream Deck. My solution was heavily inspired by TJ Luoma’s setup described on GitHub two years ago, and my goals were to build off of his Stream Deck display to give myself the same glanceable info on my next meeting, simplify the setup, and add the hooks to automate turning my DND red light on and off automatically when my meetings start and end.

TJ’s solution is based on iCalBuddy (note), eight KM macros, and two external bash scripts, which he uses to setup his Stream Deck to show a button that always shows when the next meting is and changes color as your next meeting gets closer. My solution does that the same and uses iCalBuddy (TJ’s same iCalBuddy version), but no external scripts, and only two KM macros:

(Note: Because I’m sharing this macro logic across two computers with two Stream Decks I also have KM macros that set the button ID and then fire the #1 macro. I’m not including those macros here though as most people do not need that level of abstraction.)

This simplification is important as I have two Macs that I want this solution to be usable and synced between both of them. I also added the logic to integrate with my home automation system (Home Assistant) to turn my red DND light on or off. As a part of that logic, I also added a global variable that says to all KM macros whether or not I’m currently in a meeting and I think that could be really helpful to add to other macros in the future. For example, any automation that makes sounds or pops messages can now know that I’m in a meeting and avoid taking any actions that would disturb the meeting. 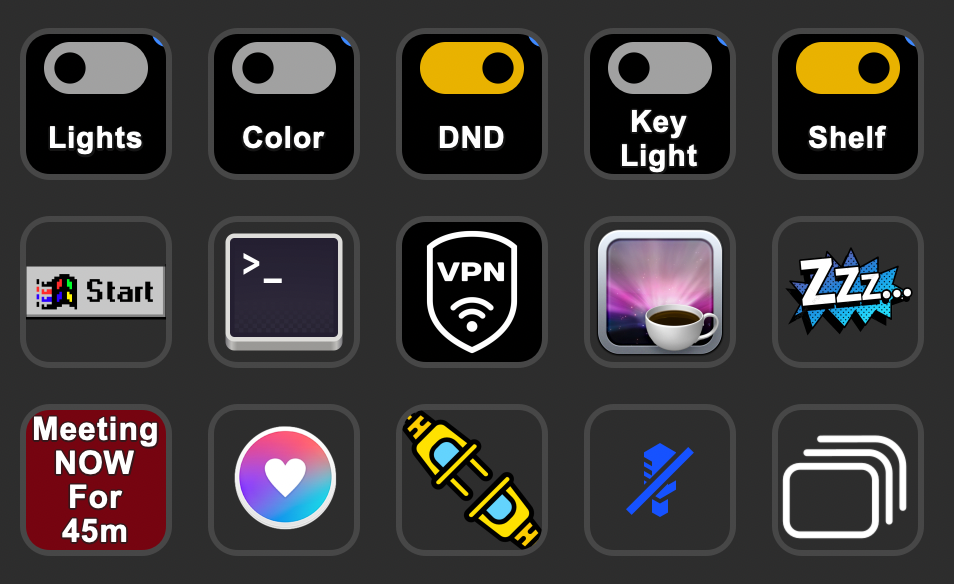 I haven’t had this solution in place for long, but I love it. It’s sounds crazy, but yes, even just having to hit a button is something that I would frequently forget and now the DND light turns on immediately when the meeting starts and off at the end.

There are edge cases that I may or may not deal with at some point. For example, automatically turning off the DND light at the end of a scheduled meeting time might prove to be annoying if meetings run over frequently. Another potential issue is that not all “meetings” need the DND light, such as a lunch or doctor’s appointment where I’m not in my office. I could deal with that by ensuring those are on a separate calendar that I don’t track with iCalBuddy, or by adding a flag in the title that my automations can look for and utilize. It may not be worth the trouble though.

Here is a link to an exported copy of the KM macro that includes all of the button display logic and below is a screenshot of the macro if you wanted to just get a sense of how it works.

I Fell in Love with the Stream Deck

How to Deploy Wordpress without Murderous Rage

Early this year I setup a bunch of calendar related automations with my Macs, Keyboard Maestro, and the iCalBuddy script and they’ve been very successful. I have a button on my Steam Deck that shows when my next meeting is, and I have serval automations triggered when I’m currently in a meeting such as turning on a red light outside of my home office door.

Studio71 Germany has recently launched not one but two virtual influencers and they’ve done a great job with the implementation and marketing around this project (disclosure: I am the global CTO of Studio71). I’ve been thinking about it a lot and on the one hand this idea of a “fake” or “virtual” influencers comes and goes over the years and every time it comes back we all like to pretend that it’s a crazy idea.

The Story of My Slightly Funny Coolio Joke

Coolio, the rapper who absolutely slayed the 90s, sadly died today at the age of 59. Coolio, the West Coast rapper whose gritty music and anthemic hits like “Gangsta’s Paradise” helped define hip-hop in the 1990s, died on Wednesday in Los Angeles. He was 59. His longtime manager, Jarez Posey, confirmed his death.

Read more
This site uses cookies. By continuing to use this website, you agree to their use.I Accept